A 78-year-old pensioner fugitive who donned a lady’s pink hat for cover, washed his underpants in a stranger’s house and hitched a bus ride out of town was branded a ‘legend’ by Hunted viewers.

In last night’s episode of the Channel 4 show, Mervyn Little, from Lancashire, was one of ten fugitives on the run from an elite team of former police, military and intelligence personnel.

And with his polite manners and laid-back approach, it wasn’t long before Mervyn won over the heart’s of the nation.

‘Mervyn on #Hunted. Regardless of the outcome, you’re a legend and the nation’s sweetheart we never knew we all needed,’ wrote one, while a second enthused: ‘If Mervyn don’t win…we riot!’ 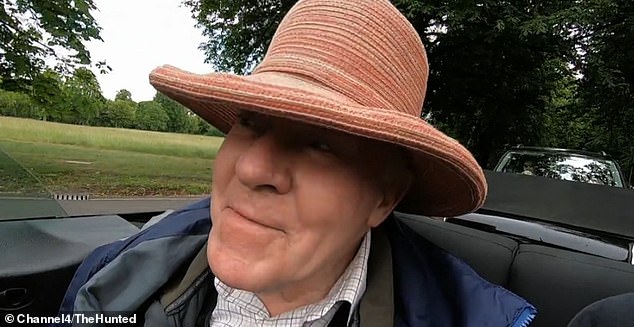 Mervyn Little, 78, from Lancashire, was one of ten fugitives who went on the run in last night’s episode of Channel 4’s The Hunted. Pictured, hitching a ride with a passerby 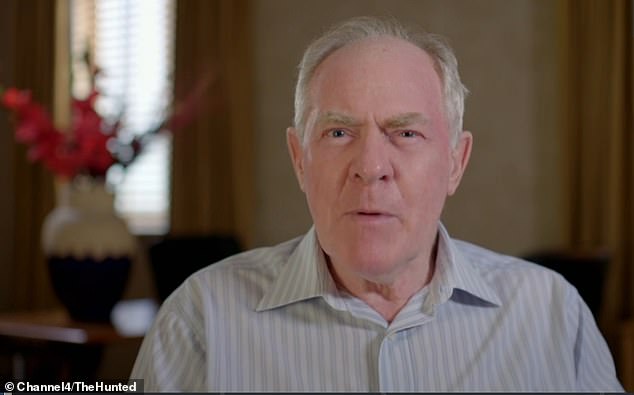 Viewers were quick to fall in love with Mervyn, with one branded him a ‘legend and the nation’s sweetheart’ (pictured)

A third added: ‘Love the lady in the mini, gives the fella a lift, lends him her hat as a disguise and then gives him a fiver for food,’ while a fourth penned: ‘Merv using the bank then casually strolling around the town in his Panama hat knowing there’s lots of b**** about. What a don!’

At Hunter HQ, Ben clocked Mervyn for an easy target, until he uncovered the pensioner’s secret past.

‘I spent 24 years in army intelligence,’ Mervyn explained. ‘I suppose you could say I’m coming out of retirement to go on the run. This is one chance I’ve got to satisfy myself I’m not dead from the neck up.’

After jumping in the passerby’s car and being kindly given a fiver for food, Mervyn then decided to bed down in woodland six miles outside of Bristol.

A local family provided him with camping equipment and food, but there was one thing on his priority list – clean underpants.

‘It’s just occurred to me, have you got a sink where I can rinse these out?’ he asked the strangers, before explaining to the camera:

‘I didn’t expect to be washing my underpants in a stranger’s house. I left the army in 1986, but my wife would maintain I’ve never really left it because I carry with me all the quirks that comes with it, like this, personal hygiene. 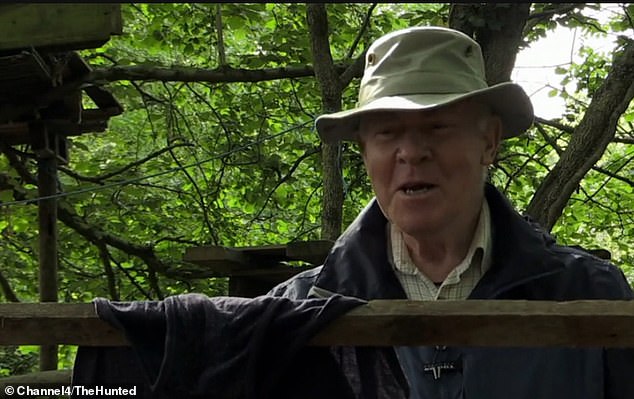 The 78-year-old was seen washing his underpants in a strangers house, before trying to drive them above a fire in the middle of woodland 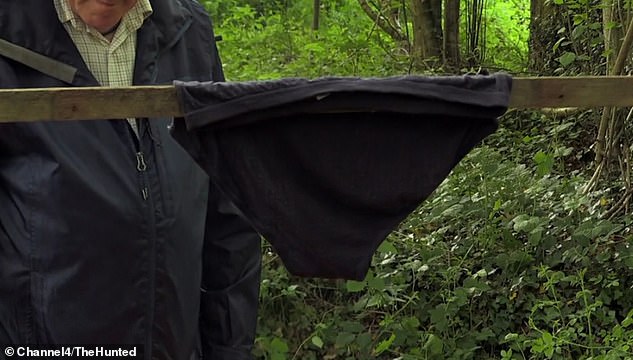 Mervyn joked: ‘There it is, situation: Wet underpants. Mission: Get them dirty. Execution: Build something over a fire’. Pictured, drying his underpants

Taking to Twitter, one joked: ‘I beg man like Mervyn gives Ben the slip! Who else casually dries their underpants over a fire moments after going on the run? What a guy!’ (pictured)

In the next clip, Mervyn can be seen hanging his underpants out to dry on a branch over a fire.

‘There it is,’ he joked. ‘Situation: Wet underpants. Mission: Get them dry. Execution: Build something over a fire.’

And those who tuned in were quick to take to Twitter in response to the amusing scene.

‘Priority one clean underpants,’ wrote one, while a second added: ‘Go Merv, keep those pants clean.’

A third added: ‘Cancel the rest of the series. I’ve declared Mervyn (aka Captain Underpants) to be the winner. Stand down hunters,’ while another commented:

‘I beg man like Mervyn gives Ben the slip! Who else casually dries their underpants over a fire moments after going on the run? What a guy!’

However, come the end of the episode, an elderly couple informed the Hunter’s of Mervyn’s whereabouts – much to the dismay of those rooting for him at home. Luckily, by this point, he was enjoying a crossword after catching a bus out of town.

‘OMG!!!! Why would you snitch on Merv after knowing he’s not really a con man you thought he was? Have some compassion on your fellow senior citizen!’ raged one, while another agreed: ‘How dare you grass Mervyn up.’

A further joked: ‘I don’t care about the others I just want to see if Mervyn caught his bus!’

TEACHING A BEGINNER HOW TO APPLY MAKEUP | TIPS AND TRICKS

TEACHING A BEGINNER HOW TO APPLY MAKEUP | TIPS AND TRICKS

View All
Fashion Tips For Men

View All
Beauty Tips and Tricks

Some Barbering Tips & Tricks Might Improve All Your Haircuts! Techniques You Must Know!

What is Pros and cons of getting Your Beauty Tips Online